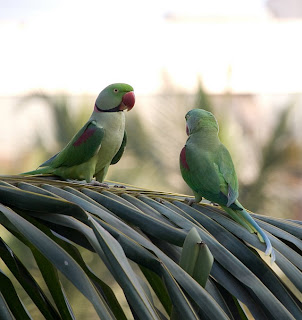 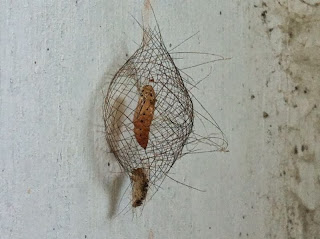 My father in law just sent in these pictures of a chrysalis/cocoon, which is just amazing looking. But I have no idea what caterpillar this is. I have never come across or read about a butterfly/moth caterpillar that builds a cocoon within a weave mesh. The resulting cocoon looks like it floating in the middle. Also, if you notice, the caterpillar has shed its skin before entering the cocoon. I do hope someone can ID this. it's just amazing to look at and it'd be brilliant to put a name to it.
Post a Comment
Read More... 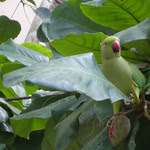 An Indian Almond tree has started flourishing outside my kitchen window, leading to an influx of visitors I was never privy to earlier. Finally, I can also say – like some ornithologist authors – that I too have a balcony from which one can get to watch some bird antics. Well, anyway, this Indian Almond tree has not only drawn the tailor bird, parakeets and mynahs for its shade, it's fruit has also lured a fruit bat. I was told he/she had started visiting every evening and I was lucky enough to get a full show even before the evening light had faded. This fella was larger than I had imagined and happily tucked into four almonds! Brought back memories of the days we used run around these "badaam" tree chucking stones, so we could eat them with some salt.
Post a Comment
Read More...

Bird-watching at the Gateway of India

August 08, 2013
These were taken ages ago when I had visited Gateway of India on two occasions in the morning to try out some cameras. Both cameras, one a micro four thirds and the other a super zoom, were unable to match up to the fast-flying Gull-Billed Terns . But after a lot of tracking and whirling around, swivelling about on my heels, I managed to get some shots. These had to be filtered out and cropped because the terns were actually really small in the pictures and there was too much sun for liking. None of these shots are like those we are used to see on bird blogs because the gear I used is not equipped to handle a subject like a fly-by sea bird. To top that, it was hot and each time I moved towards the lot that were flocking near a feeder, they would disperse as though they sensed a stalker. That really tried my patience. Without much ado, here is my sorry attempt at birding in my city. (Strangely, before I started seriously amateur birding, I never ever bothered to see what kind of b
Post a Comment
Read More... 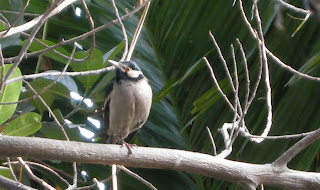 I took these years ago in Siliguri, West Bengal. Didn't go birding or anything. Some shoot from the hip. Me, I just shoot from the balcony. :)   The Asian Pied Starling or Pied Myna      The Jungle Babbler   A garden bug, whose identity I do not know... do you? I was able to identify the two birds thanks to the folks on BirdForum.net Bird Forum . Really neat site, only thing is the gallery is viewable after registering. Which is not a biggie is a bird lover.
Post a Comment
Read More...

November 29, 2012
My five year old exits the elevator in an up-market mall. Something catches his eye and dashes towards it. Mom: You can't go in there! Boy: Why? It's all red in colour. I like it. I want to go in. Mom: No. This is Comedy Central. It's very people tell jokes and make visitors laugh. Boy: I want to go in. Mom: But it is only for big people... Boy: Why? Only big people laugh? Mom rolls eyes. Girls standing outside the Comedy Central entrance start giggling.
Post a Comment
Read More...
More posts